As far as research has revealed, turtles are not colorblind. Turtles can see colors, according to Animal Planet, and appear to be particularly drawn to red, orange, and yellow objects, possibly because they view them as something they might want to eat since they inspect them.

Turtles are not colorblind, and so they can perceive an additional color that humans cannot.

Their color perception is said to be significantly better near the red/yellow end of the spectrum.

Scientists have demonstrated that red-eared sliders can see in color. Because of their outstanding color vision, the species has been subjected to numerous investigations. They carried out both behavioral tests and microscopic examinations. Turtles can distinguish between colors very well, particularly in experiments involving treats for choosing the correct color! This shows both accute color perception and problem-solving ability. 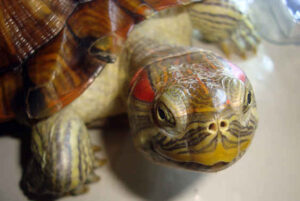 Turtles are not colorblind but can perceive one additional color that humans cannot detect. The hue is often referred to as “red,” and no matter how hard we try, we can never imagine it.

As a result, all hues may be produced for humans by combining red, green, and blue light, and this is how a color television set works; a combination of three wavelengths produces several million apparent “colors.” Some turtles, like birds, have not three, but FOUR types of cone cells: red, green, blue, and one sensitive to ultraviolet light (wavelengths shorter than blue, to which humans are blind).

See also  Can Turtles Live in a 10 Gallon Tank? [ANSWERED]

As a result, they will see hues we cannot envision as well as distinctions between colors that appear identical to us (e.g., with or without UV reflection).

If you look closely, you will notice that they all have eyelids that protect their eyes from the sun. They can see quite well under water but not on land.