Each turtle has the following strengths and weaknesses, as described in the original Eastman/Laird descriptions from the TMNT role-playing game circa 1985:

Leonardo: Due to his constant training, Leonardo is by far the most technically skilled fighter. In one-on-one combat, his fighting style is nearly impenetrable.

Donatello: While Donnie is physically the weakest of the four, he is far and away the most intelligent. As a result, a fighting style based on distance and exploiting an opponent’s weaknesses develops.

Michelangelo: Mikey is the physical prodigy of the brothers. The comparison was made between an amateur and an olympian athlete. As a result of his large reservoirs, he has a much more relaxed combat style.

Raphael: Raph is simply the most tenacious and lethal of the four. What he lacks in ability, intelligence, and athletic prowess he makes up for with sheer strength, rage, and lethal intent.

So, it depends on the situation

ALSO SEE: How Old are the Ninja Turtles Now?

Controversial answer, but for me, Leonardo is the obvious choice. Given that the primary debate appears to be between Leonardo and Raphael, I will state in my argument why the blue-clad turtle is a slightly better fighter than his red-clad brother.

The issue with these sub-arguments is that there are far too many instances spread across multiple adaptations to determine who would win a fight definitively!

They simply fight too much, and one of them will lose and the other will win, so I can only conclude that they are evenly matched.

The Shredder has been a seemingly unstoppable force of nature in nearly every adaptation, outmatching even Master Splinter, but he is always defeated in the end. Whom may you inquire? Leonardo defeats the series’ ultimate villain in both the 2003 and 2012 cartoons.

See also  Do Snakes eat Turtles/Tortoise? - HOW? & Other FAQ's

Though technically in the 2003 series, the Shredder does not remain dormant for long due to (SPOILERS). Leonardo delivers the fatal blow in the 2012 series’ final confrontation with the now-Super Shredder, who defeated Master Splinter, after the rest of his brothers and allies are defeated and he is left alone to face the villain.

Raphael puts up a valiant fight against the Shredder in these encounters, but he is eventually worn out and ejected from the fray, while Leonardo is compelled to continue fighting for the team’s survival. Which is why Leonardo is the superior fighter.

He is the turtles’ most skilled practitioner of ninjitsu and has mastered his double katana style, which combines for incredible offense and defense.

While Raphael is physically stronger and a legend with his sais, Leonardo has far more training and will be able to stand up to all of the great masters. 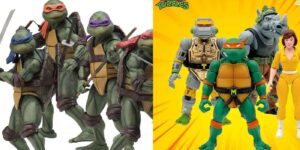 Leonardo is the most excellent turtle. You need to put an end to your Ralph is the strongest nonsense. He is not. Raphael being the strongest turtle is a later addition, following the sale of the rights to the teenage mutant ninja turtles.

See also  Turtle Throat Puffing - 15 Meanings & What to do

And while it is true that he is the most lethal, this is not because he is the best.

Leonardo is the senior, the best fighter, the most disciplined, and is constantly training, while Ralph is a ticking time bomb. Ralph was never the hulking, muscled-up turtle Nickelodeon depicts him as.