If you own a Horsefield pet tortoise, then you should be aware of the fact that 80% of their diet should comprise of fresh veggies. But what about spinach? Is it safe, healthy and nutritious food to feed a tortoise? I spent 7 days on some research on this leafy green vegetable and tortoises. I would like to share this information with you here today.

So, can Horsefield tortoises eat spinach? Although yes, Spinach should not be fed often to a pet tortoise or make up majority of their diet.

While a small amount of spinach is unlikely to cause harm, Spinach is high in a compound called Oxalic acid which prevents proper calcium absorption and can even lead to the formation of kidney stones when consumed in excess.

Although small quantities of spinach wouldn’t result in harm, due to its potential to cause adverse health effects, it is best avoided.

Spinach is on many lists as a “NO” and others as “OCCASSIONAL”. However, I believe the same thing applies to most foods they all need varying as much as possible.

Florrettes is a good mixed as there’s no spinach although it cost a bit more. Optionally, you can grow weeds such as dandelions and keep them in ted ridge for prolonged use.

They love and thrive on various plant-based matter. Fresh vegetables such as collard greens, dandelions, and kale along with the occasional bell pepper, squash and sweet potato which goes a long way to providing them all the nutrients, minerals, and vitamins in which they need.

Let us now take a closer look at the health consequence of spinach in closer detail; outlining why it is not the best of foods before looking at some suitable alternatives. 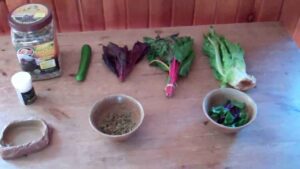 Health Consequence of Feeding Spinach to your Tortoise?

The leaves, roots, stems and stalks are rich in Vitamin C, Potassium, Calcium, Vitamin A and water content but low in sugar and contains other compounds that can cause an issue.

See also  Can Horsefield Tortoises Eat Bird Seeds? Is It Suitable For Them?

Spinach is rich in a compound known as oxalic acid. Oxalic acid is a molecule found in particular plants that binds to important minerals including Magnesium and Calcium, and seriously limits the ability for them to be absorbed and used.

In other words, it reduces a tortoise (irrespective of the breed) ability to use these important minerals towards maintaining their healthy and strong shell, alongside their other bodily functions.

Also, spinach has shown to be rich in calcium oxalate crystals which in excess, lead to formation of bladder and kidney stones.

Because of their size and structure, they can also lead to irritation of the mucous membranes and skin in tortoise throat and mouth when eaten in excess.

So while it is not toxic or particularly harmful as such and while a tortoise may be able to eat some from time to time – it should never make up a significant proportion of the diet.

Technically they can eat it, but they need to have very small amounts compared to other green leafy vegetables.

But, be wise in feeding it. Plus, spinach is not the only meal high in oxalates. It is a naturally occurring compound that can be seen in plant matter.

That is why regularly consumption of spinach can be a problem and prove toxic.

Here are the other foods to be aware and equally cautious of providing together or in excess:

The compound element, Oxalade is also present in cabbage, turnips, carrots, berries, Asparagus, broccoli, and carrots, but in smaller amounts.

So, you see that many of these veggies are typical fed and provided in a tortoises diet already. You just need to be careful about pairing them together and giving them too regularly.