Turtles love eating tomatoes! Even better, tomatoes are sfae for turtles to eat. But, never feed too frequently. If possible, serve only as treats.

So, do red-ear turtles eat tomatoes? Yes, they can eat tomatoe fruit once a month, a few cubes a month should do no harm. Plus, feed in a different container, as they can make a mess of the juice.

Older red-ear turtles will eat tomatoe more as comapred to younger turtles who prefer a meaty diet of crickets, mealworms, shrimp, earthworms, bloodworms, krill, tadpoles and so on.

They can also feed on feeder fish, but this is not recommended unless bought fresh from a trusted breeder as they may contain hidden parasites.

They can also consume leafy veggies such as cabbage, lettuce, kale, dandelions, greens and so on. Avoid feeding iceberg lettuce, which is full of water and has almost no nutrients, even for humans, so it may lead to  diarrhoea in smaller animals like turtles. 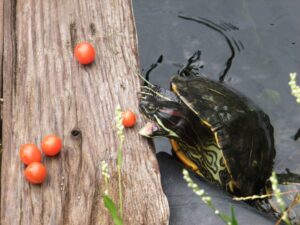 Yes they can eat grape tomatoes with no issues at all. Though I suggest you add a little additonal calcium when you feed them as they are rich in phosphate.

Also really acidic. Never feed too much as that can interfere with the gut fauna/flora.