Alligators are known to consume turtles. Turtles’ shells are easily broken and penetrated by gator teeth, which have a biting force of 2125 psi. Alligators, on the other hand, make excellent friends with turtles when they are not hungry or have another source of food.

Alligators consume a variety of foods depending on their age and size. When alligators are young, they feed on fish, insects, snails, crustaceans, and worms. As they mature, they take on increasingly larger prey, including larger fish like gar, turtles, and various mammals, most notably coypu and muskrat, as well as birds, deer, and other reptiles.

Additionally, their stomachs frequently contain gizzard stones. If they are sufficiently hungry, they will even consume carrion. Larger alligators have been known to ambush dogs, Florida panthers, and black bears, effectively making them the apex predator throughout their range. As a top predator, it may have an effect on the abundance of prey species such as turtles and coypu. 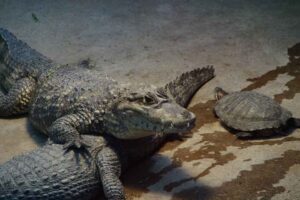 Yes, alligators are capable of eating turtles. Although alligators appear to be friendly toward turtles, their wild instincts always kick in during times of hunger. Because the wild is unpredictable, predators such as alligators cannot be picky when there is a food shortage in their area.

Thus, if a turtle is the simplest and most accessible food source, adult alligators will not hesitate to consume it.

Alligators are nocturnal. They typically wait for prey to approach them before attacking. Turtles resting near the water’s edge are easy targets for alligators, as a turtle with its back to an alligator will be unable to see the predator behind them.

It’s worth noting, however, that smaller alligators are incapable of eating turtles due to their size.

Young alligators feed on smaller snails, insects, fish, and worms until they reach adulthood. As their bodies grow larger, they will gradually begin preying on medium to large reptiles and animals.

Alligators are known to eat larger animals than turtles, but because turtles spend the majority of their time in or near bodies of water, they are closer and more accessible to alligators than small deer and other reptiles and mammals that only visit the water for a drink.

Alligators and turtles coexist in the same habitat, resulting in a more intimate predator-prey relationship.

Yes, despite their tough exterior, alligators can easily consume a turtle in a single bite. It’s comforting to know that alligators are not particularly picky eaters. Their carnivorous nature compels them to consume anything that moves or comes within their reach, particularly during their feeding period.

Consuming a turtle as an alligator would be as simple as humans consuming a pistachio with the shells intact. Alligators are renowned for their jaw strength, which makes cracking a very hard shell like that of a turtle a piece of cake.

Alligators grow to enormous proportions, and eating a turtle will undoubtedly be a challenge for them.

Male alligators can weigh up to 1,000 pounds but typically grow to about 11 feet (3.5 meters) in length and weigh 600 pounds, while females can weigh about half as much as males and grow to about 8 feet in length.

Yes, when alligators prey on turtles, they consume their shells as well. Given their lack of hands to peel off the shell, alligators are forced to consume turtles whole.

They crush the turtle’s shell in order to obtain a piece of meat large enough to fit in their throat.

This will be no problem given the average size of an adult alligator’s mouth. Their digestive system is designed to break down bones, cartilage, shells, and pretty much anything else they can swallow.

You may wonder how an alligator can break a turtle shell. When alligators hunt turtles, they use their powerful jaws to crush the turtle’s shell. No matter how tough a turtle’s shell is, it is nothing compared to the alligator’s jaw strength.

Alligators possess one of the animal kingdom’s most powerful bites. Consider this: if you are inside an alligator’s mouth, pushing it open, the sensation is similar to that of lifting a pick-up truck. Their bite force can exceed 9,452 newtons, or approximately 2,124 lbs!

Although it’s worth noting that these carnivores will, of course, ignore an empty turtle shell if they come across one!

Do Alligators Choke on Turtle Shells?

No, they don’t. Alligators love turtles, and they’ll eat them if they get the chance. They also eat mammals, reptiles, fish, birds, and anything else they can get their hands on. They have stones in their intestines, just like birds. These stones help them break down turtle bones and shells.

Normally, alligators do not consume turtle eggs. Given their size and the shape of their mouth, snatching eggs from the ground with their long jaw is near-impossible. In the wild, alligators prefer to prey on larger prey such as turtles.

Larger preys contain more meat, which sustains and fills them for a longer period of time, making it an obvious choice.

Alligators can go two to three years without eating. They are capable of slowing their metabolism and entering a lethargic state if necessary to survive a prolonged fasting period. When food is plentiful, alligators eat once a week.

Alligators are the closest thing we have to a living dinosaur; indeed, they have been dubbed ‘living fossils’. Alligators have been estimated to have existed for approximately 180 million years based on fossils discovered over the years.

I can only guess that their ability to go long periods of time without food and their non-picky eating habits are some of the reasons!

Their brains weigh an average of 8 to 9 grams. With an average weight of 600 pounds, we can safely say that they are not the’smartest’ animals in the wild.

Alligators are vying for the title of ‘best parents’ in the animal kingdom. They have been known to care for their young for up to three years.

Alligators’ skin contains extremely sensitive vibration sensors. While they are not the fastest swimmers, they can quickly avoid danger due to their ability to detect even the slightest vibration in the water.

The alligator’s back is literally armored. Each spike on their back contains a bony plate that makes it extremely difficult to penetrate their skin. It’s no wonder their species has survived for millions of years!

In the winter, an alligator can survive being frozen in the water. They will position their nose above the water just before it freezes, allowing them to breathe through ice if their body becomes frozen. They can survive in this state for an extended period of time until the ice melts.

Alligators epitomize the wild animal – they are large, strong, tough, and robust. While the more popular American Alligator is no longer considered endangered, their Asian cousin, the Chinese Alligator, is now classified as critically endangered. Chinese Alligators are one of the few species found outside of the Americas.

As with any other animal, alligators contribute significantly to the maintenance of nature’s balance in their habitat. Hopefully, the more knowledge we have about their species, the better equipped we will be to protect them from extinction on this planet.

In the wild, What other Animals Consume Turtles?

Racoons pose a threat to freshwater turtles due to their ability to squeeze into small spaces and steal turtle eggs from nests along river banks. Snakes will also consume turtle eggs near the shores of lakes and ponds that contain turtle nests.

Once young turtles hatch from their eggs, large birds such as vultures will prey on them. Vultures have even been reported eating adult sea turtles when they come into contact with coastal waters.

Additionally, some hawks and falcons (as well as owls) are capable of swooping down and snatching turtles from the ground.

Occasionally, large birds will pick up and drop a turtle from the air in an attempt to crack the shell.

How do Turtles evade Predatory Prey?

Turtles have adapted in a variety of ways to predator threats. If a turtle is attacked, it will retreat into its shell for protection, and some predators will be unable to penetrate their shell.

Turtles occasionally evade predators by utilizing their speed and size. Turtles such as the diamondback terrapin (Malaclemys terrapin) swim rapidly and kick their webbed feet in order to outrun a predator such as a raccoon.

When turtles are unable to flee quickly enough, they resort to other means of protection. Common musk turtles defend themselves by biting their attackers. The loggerhead sea turtle emits pheromones that are extremely repulsive to predators, sending the message “stay away!”

Certain turtles, such as the snapping turtle (Chelydra serpentina), will defend themselves when attacked. Turtles may bite a predator’s leg or arm and then flee while the predator is distracted by the bite’s pain.

Numerous turtles avoid predators by submerging. This allows them to flee a predator by hiding in a nearby pond until the threat has passed.

This adaptation is advantageous because it keeps them away from their nest and potential predators (and also ensures that they do not end up walking in circles).

A lot of turtles like to ride on the back of gators. It’s called phoresy in ecology when two things are close together.

People talk about phoresy when they talk about how two organisms are linked together in time. One of them uses the other as a way of getting around. The turtle may be riding on top of the gator so it can go over the surface of the water, The gator may also be a good place for them to sun themselves in a large body of water.

Alligator and turtle are riding each other

This isn’t always the case, though. Turtles may be having fun with the gator when they climb on top of them. 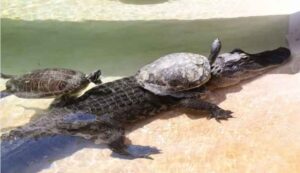 There are times when alligators become friends with turtles, even though alligators can eat them. The gators even let the turtle ride on their back.

Turtle shells can be broken by alligators because of their powerful bite force of 2125 psi. When a turtle is friends with an alligator, I think they’re taking risks.