The majority of barnacles are harmless to sea turtles because they are attached to the shell or skin on the outside. Others, on the other hand, burrow into the host’s skin, causing discomfort and providing an open target area for subsequent infections.

Excessive barnacle cover can be a sign of a turtle’s general poor health. Typically, sea turtles are rendered immobile first, and then covered in an abundance of other organisms such as barnacles and algae.

Fortunately, turtles are extremely resilient and can occasionally recover from infestations.

Perhaps you’ve seen or read about barnacles attaching to turtles. Barnacles are unable to survive in water on their own. They require a hard surface in order to thrive. A turtle’s shell is an example of this type of hard surface.

Why Do Barnacles Attach To Turtles?

Due to the hardness of a turtle’s shell, barnacles attach to it. Barnacles require a hard surface to attach to in order to thrive. A single barnacle is harmless to a turtle. However, an abundance of barnacles can cause a turtle to become inactive, impair its vision, make eating difficult, and occasionally result in infection.

Thus, barnacles do not pose a threat to turtles unless they cover the entire or a significant portion of the shell. Allow us to now comprehend when and how barnacles can be detrimental to turtles.

Barnacles are small, adhesive crustaceans related to crabs and shrimp. They are grayish-white in color and prefer to live on hard surfaces like rocks, boat hulls, and pilings. Barnacles are extremely sensitive to extreme cold or dry conditions.

Barnacles are filter feeders as adults. They feed on plankton and other aquatic debris. Barnacles extract food from the water using their legs. As a result, they thrive in marine and moving waters.

Barnacles attach to rigid substrates as larvae. They secrete an adhesive substance that allows them to adhere to any hard surface they come into contact with. Once attached to a hard substance, barnacles remain stationary for the remainder of their lives.

When barnacles are larvae, they adhere to hard surfaces. Due to the fact that barnacles require constant water movement, they will settle on any moving substrate. That is why, when a turtle comes into contact with barnacles, the barnacles become attached to the turtle’s hard shell.

Are Barnacles Harmful To Turtles?

The majority of barnacles are harmless and do not harm turtles. However, if the turtle’s shell is infested with barnacles, this is not a healthy sign.

Excessive barnacles on the shell of a turtle indicate poor health. A healthy turtle can maintain a healthy population of barnacles. Thus, if a turtle’s shell is clogged with barnacles, it can be fatal to its health.

Barnacles in excess are indicative of a slow and inactive turtle. The turtle will be unable to move quickly due to the barnacle overload. Barnacles that are too numerous will also cause discomfort to the turtle.

Due to the turtle’s increased slowness, it will have difficulty searching for food. Due to its sluggishness, the turtle will be unable to capture its prey. In such cases, the turtle may become ill as a result of inadequate food intake and starvation.

Additionally, if the barnacles are attached near the turtle’s eyes, they will impair its vision. Barnacles attached to the turtle’s mouth are also dangerous. Due to an abundance of barnacles, the turtle will be unable to eat properly.

Barnacles have the most detrimental effect if they drill into the shell’s carapace. This can result in severe infection and is potentially dangerous for the turtle.

Barnacles readily attach to turtles. They typically attach to sea turtles due to barnacles’ preference for saline water. Is there any way for sea turtles to rid themselves of barnacles attached to their shells?

See also  How to Get Rid of a Pet Turtle & Where to Donate! 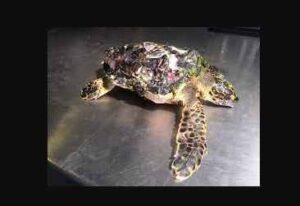 Do Sea Turtles Have A Way To Remove Barnacles By Themselves?

Barnacles thrive in the sea, attaching themselves to any hard surface. Due to the turtle’s hard shell, they easily become attached to it. They don’t have a special way to get rid of the barnacles that are stuck to them.

They can, however, remove some barnacles with the assistance of their flippers. Simultaneously, some barnacles may fall off on their own if the turtle’s shell is scratched.

When female sea turtles have sex with their male counterparts, the barnacles attached to their shells fall off. This is because female turtles rub their bodies against male turtles while having sex. As a result, some barnacles fall off on their own.

Now that you’re aware that excessive barnacles are detrimental to turtles, you’re probably wondering how you can assist the unfortunate turtles.

Can You Remove Barnacles From Turtle Shells?

Barnacles are extremely hardy creatures. They are not easily dislodged. As a result, it is not recommended to remove barnacles from a turtle’s shell. It is best to consult a marine wildlife rehabilitation center that can provide specialized care for the turtles.

Forcing the turtle to remove the barnacles can be extremely painful. The plastron and carapace of the turtle are delicate. As a result, removing the barnacles forcefully may cause damage to the turtle’s shell.

When several barnacles are attached to the turtle’s shell, it is even more critical to carefully remove them.

Barnacles can become embedded in the turtle’s shell. Trying to get rid of these barnacles with a lot of force could hurt the shell very bad. Additionally, barnacles leave an open wound when they are removed from the surface. If this wound is not treated properly, it may become infected.

This is even more dangerous than the barnacles.

In the United States, barnacle removal requires a permit. Barnacle removal without a permit is a violation of the Endangered Species Act and is a very bad thing to do. Harassment of listed species is considered.

People who work at a wildlife center know how to remove barnacles from a turtle’s shell. The turtles are reintroduced to freshwater by the Center. This means that no more barnacles will grow, and any algae that is already there will fall off in the next 2 to 3 days. Additionally, keeping the turtles in freshwater makes barnacle removal easier.

Additionally, the Center’s staff conducts a blood test to rule out any other adverse effects. With the right care and medicine, most turtles are back in the water in a couple of weeks, and then they are sent back to the sea.

Turtles usually don’t get killed by barnacles. They do not pose a threat to turtles’ lives. No one hurts the turtle in any way when there is just one barnacle on it.

Then again, if there are barnacles on the shell of the turtle, it is something to be concerned about. Turtles struggle to swim and move around in these situations due to an abundance of barnacles.

In the wild, turtles are often found with barnacles on them. Due to the fact that sea turtles spend their entire lives in the water, barnacles attach themselves to the turtle’s shell.

Barnacles need a hard surface to grow on, so they watch out for anything that comes near them. Due to the turtle’s hard shell, they easily become attached to it.

It doesn’t matter how many barnacles turtles have, because the only thing they attach to is their shell, not their body. However, too many barnacles are bad for turtles and make their lives hard.

To help a sea turtle, don’t try to get rid of the barnacles that are on its body. Your ineptness may endanger the turtle. It is always preferable to consult a rehabilitation center that specializes in treating sick turtles.