True, quite frequently. Crocodiles, alligators, and caimans feed primarily on terrapins and turtles. Crocodiles that live in the sea, such as saltwater crocodiles and American crocodiles, consume sea turtles (most often when females come to beaches to lay their eggs).

They consume the meat portion and discard the shell.

Because a crocodile’s jaws are the strongest, with a pressure of 3700 psi, which is greater than that of a car crusher (2000 psi), a turtle’s shell is useless when trapped between the croc’s jaws.Crocs that live in rivers frequently prey on freshwater turtles and terrapins.

With the exception of soft shell turtles, none of these are particularly easy to eat.Indeed, they do. Crocodiles have such a powerful bite that they can even crush tortoise shells.

However, they will attack tortoises only out of desperation, in my opinion. They usually target antelopes and wildebeest that are attempting to cross the river.

ALSO SEE: Is Yoshi a Turtle, Dinosaur or a Frog?

Tortoises are not on their menu, but they are capable of attacking them.

And frequently, the outcome is as follows:

They consume the entire turtle and are unable to digest its shell properly, despite the fact that crocs have the strongest stomach acids of any living organism. As a result, they frequently die.

Crocodiles have existed on this planet for more than 240 million years. They live in swamps, wetlands, rivers, and other bodies of water throughout Africa, Asia, Australia, and America.

See also  How Long Can a Turtle Go Without Eating Food? [Useful Tips]

Their bite force and aquatic dominance have propelled them to the top of the food chain. They are the apex predators due to their acute hearing, smell, and vision.

All 24 of them are capable of biting with great force. However, the strength of a species varies according to its size.

However, when pound for pound, even the tiniest crocodile species possess a lethal bite force.

Which Crocodile Has The Most Powerful Bite?

Saltwater crocodiles have a bite force of more than 3700 pounds per square inch. They average 17 feet in length and weigh around 1000 pounds. However, some can reach a length of 23 feet and a weight of 2200 pounds.

These crocodiles inhabit a large area of Northern Australia, Eastern India, and Southeast Asia. They have adapted well to life in salt water and can spend weeks hunting in coastal areas.

Crocodiles Eat Turtles in What Ways?

Crocodiles are renowned for their cunning hunting style and are capable of killing a turtle in a variety of ways. They can swallow, bite, or perform the infamous death roll to rip the flesh from a turtle.

Crocodiles can swallow smaller turtles, particularly baby turtles, whole. As a result, they will avoid the hassle of biting or chewing on tiny turtles.

They have different plans, however, when it comes to eating larger ones.

Adult turtles have robust shells that are too large for a crocodile to swallow in one gulp. As a result, the crocodile must crack the shell before tearing the turtle’s flesh.

See also  HOW Can Turtles See In The Dark? Mystery Explained!

As with leatherbacks, some sea turtles weigh in excess of 800 pounds, making them a difficult target for saltwater crocodiles. In such encounters, the crocodile will employ its infamous “death roll” to subdue the turtle.

The crocodile’s explosive bite will seize and rotate the turtle, mutilating its body. The crocodile will then gnaw away at the dismembered body parts. 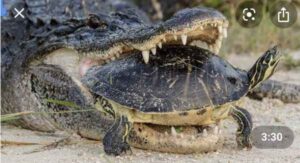 Crocodiles are cunning and adept at snatching prey from the shadows. They live alongside turtles and consume them when they are hungry.

And when starving crocodiles discover turtles meandering through their territory, these ruthless Godzillas will make turtles their primary target.

Crocodiles are easily capable of overwhelming adult turtles. Thus, for baby turtles, whose shells are easily cracked open by these prehistoric carnivores, the story will be the same.

Crocodiles, like turtles, venture onto land to regulate their body temperature, aestivate, bask, and nest. As a result, they are quite adept at digging. And if they come across turtle eggs during the excavation, they will almost certainly consume them.

Crocodiles, like turtles, must lay their eggs on land. Certain species, such as the Nile crocodile, have been known to dig dens up to 39 feet deep.

And if they come across any turtle eggs while burrowing, they will devour them without hesitation.

Do Turtles Ride on the Backs of Crocodiles?

Yes, turtles do indeed hitchhike on the back of crocodiles. Crocodiles prefer shallow waters and frequently spend hours swimming or lying idle on the water’s surface. Turtles mistake them for driftwood and bask on their backs as a result.

See also  Why is My Turtle Is Fanning and Fluttering? FIND OUT!

Here’s an interesting video of turtles riding on the back of a crocodile:

Crocodiles, even when carrying a turtle, will not make sudden movements to dislodge the turtle. This is because if the crocodile exhibits suddenness inside the water, it risks alarming potential prey.

As a result, crocodiles typically maintain their calm while carrying turtles.

Crocodiles and turtles both require ultraviolet rays to obtain vitamin D and regulate their body temperatures. As a result, you will find them basking in mutual affection.

However, this is a love-hate relationship, with the turtle typically being eaten by the crocodile as a result.

Is It Possible For A Turtle To Kill A Crocodile?

Turtles larger than the alligator snapping turtle can kill and eat baby crocodiles. They can reach a length of over two feet and have a bite force of over 1000 pounds, which enables them to rip the crocodile’s tough skin off.

However, they are not the turtles’ first choice of food.

Crocodiles have been the apex predators since the dinosaur era, and possibly even earlier. They will, without a doubt, consume turtles.

Therefore, do not be fooled by videos of turtles riding on the back of crocodiles. The crocodile is merely biding its time and will not remain on the fence once the opportunity to crack open the turtle’s shell presents itself.