Yes, in a nutshell. In captivity, it is more often than not an accident. Typically, this occurs during hand feeding or when they are hungry and “test bite” something they see to determine if it is edible.

This video was shot spontaneously while I was cleaning our Russian Tortoise’s enclosure. It found my gloved hand “interesting” and possibly “edible,” and thus took some “test bites” to determine whether my blue gloved hand was edible.

It was not because I was “defensive” or “aggressive.” Therefore, if you prefer to hand feed your tortoise or turtle, exercise caution as they may bite your hand/figure accidentally.

The tortoise is an incredibly interesting and adaptable animal, with different species thriving in a variety of habitats throughout the world. Let us examine the reasons for biting in order to avoid causing unnecessary harm.

If you’ve ever considered bringing a pet tortoise into your home, you’re probably worried about them biting you while you’re caring for them. The term “snapping tortoise” may disqualify families with small children.

Tortoises can and will bite humans in certain circumstances. Depending on the type of tortoise you choose as a pet, you may encounter mild to severe biting.

Additionally, the tortoise will only bite their human caregivers in rare instances when provoked.

Why Do Tortoises Bite Humans?

The first reason a tortoise might bite a human is for self-defense. As with the majority of animals, if it feels threatened in any way, it will most likely snap at your fingers or anything else within reach to defend itself.

Provocations can range from picking them up to moving or colliding with them. Particularly if your pet is new to you, he or she may be unfamiliar with your sounds and smells; therefore, avoid placing your fingers within reach of their mouth.

As they mature and become accustomed to you, you can begin to take more liberties with this until you are certain they will not bite you. When we first acquired our baby tortoises, they occasionally snapped at us.

After a few years, they’ve realized they’re safe with us and never bite.

Male tortoise bites are more common, as they use their powerful snappers to establish dominance. If your tortoise has ever taken a bite out of your hand for no apparent reason, this could be the reason.

Male tortoises will also use this tactic to establish dominance among females, which we will discuss in greater detail in the following section.

Finally, tortoises may bite humans if they mistake them for food. Although the majority of tortoises are vegetarian and rarely consume meat, they can snap at your finger if they mistake it for something tasty!

This is not because they find your extremities to be particularly appetizing. Additionally, it is not because your finger resembles lettuce. This is simply due to the fact that tortoises are opportunistic feeders.

All of these factors should be considered in order to avoid numerous unnecessary tortoise bites. As with many other animals, they can be unpredictable at times. 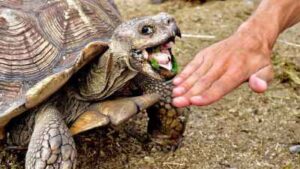 Do Tortoises Bite Each Other?

Again, the answer is yes. Tortoises are known to bite one another. They can bite to establish dominance, for mating purposes, or during a fight.

The first reason a tortoise would bite another tortoise is to establish dominance. This could occur if a new tortoise is introduced into the same area as an existing one.

Tortoises are very likely to take a few snaps at one another at some point or another as a way of marking their territory and resolving disputes. Although these types of conflicts are more prevalent among males, both males and females can become involved in them.

When male and female tortoises coexist in the same environment, the males frequently bite the females during mating season. In some instances, tortoises of opposite genders have been reported to engage in fights and mate, which inevitably involves biting.

A more straightforward reason for tortoises biting each other is self-defense, which falls under the category of establishing dominance. When tortoises disagree about anything, one of their solutions is to fight it out with their jaws.

In the most extreme circumstances, a tortoise may literally bite another tortoise. If there is ever a time when there is no food available and the tortoises become hungry, they can resort to cannibalism.

While this may come as a surprise to many, tortoises’ aggression toward humans and other tortoises has the potential to reach this level. However, as long as they are properly cared for as pets, this should not occur frequently!

The fact that tortoises bite both humans and other tortoises, and in extreme and rare cases, consume other tortoises, brings us to the subject of how strong their bites are. Are they truly that painful?

Due to the fact that tortoises and turtles do not appear to have teeth, the majority of people believe that their jaw strength alone cannot cause that much damage. After all, why would they require such a powerful bite to eat leafy greens?

If tortoises are capable of tearing a chunk out of another tortoise’s leg for food when they are starving, their jaw strength should not be underestimated.

If you were surprised to learn about these tiny animals’ aggression, check out the list below to learn just how much damage a tortoise bite can actually do to humans and other tortoises.

The force of a tortoise bite is determined by the type of diet that the tortoise species follows. Tortoises can be classified broadly as herbivores or carnivores.

Thus, herbivore tortoises have a fairly hard bite, but you will most likely only feel a slight pinching sensation. For several hours after the bite, a red indented mark may appear, but it will eventually fade away.

While the average tortoise bite is unpleasant, you will survive with all of your body parts intact, even if the bite is strong or long enough.

Carnivorous tortoises, on the other hand, will have a much greater ability to cause harm when they bite a human or another animal. These bites are extremely painful, as these tortoise species are constantly required to chew through more dense food.

Additionally, these tortoises are more than capable of breaking a human’s skin and even removing fingers with sufficient force. Therefore, you should avoid placing anything near the mouth of a carnivorous tortoise, as you may end up with a severed finger.

What to Do if You Are Bitten by a Tortoise

There is not much you can do in the case of a small, harmless bite, such as the ones from my tortoise. Simply ensure that you wash your hands before proceeding.

And try to leave the tortoise alone for a while; as I previously stated, they bite when they are stressed, feel threatened, or believe they are eating food; regardless of why they bite, they will feel a little agitated for a while, so it is best to leave them alone.

If you notice any blood, stop what you’re doing and go disinfect the wound; even a small wound can become infected, which can be very dangerous. I would also recommend visiting a doctor after disinfecting it. A doctor will be able to determine whether additional wound treatment is necessary.

If the tortoise bites you and refuses to let go, you must wait until the bite is released. Anything else will exacerbate the situation. While this may seem counterintuitive, it is the best course of action in this situation.

If it still won’t let go after a minute, you should dry to pour some water on it, but proceed with caution.

What Not to Do if You Are Bitten by a Tortoise

If a tortoise bites you and refuses to let go, avoid pulling or striking the tortoise. If you strike the tortoise, you will increase the pressure on the bite, which will remain there for longer.

If you continue to strike the tortoise until it expires or becomes unconscious, things will only get worse for you, as the jaws will apply even more pressure and the tortoise will be unable to release it.

And in the process, your wounds will deteriorate. As I previously stated, even though it may seem counterintuitive, the best course of action is to wait peacefully until the tortoise releases the bite.

After a tortoise bite, you must exercise extreme caution with your hands; avoid putting them near your mouth or food. Tortoises can carry a variety of germs and occasionally even bacteria, so it is not a good idea to spread them.

Rather than that, immediately wash your hands.

If a tortoise bites you as a result of stress, stop stressing it. Simply depart from the area and leave it alone. If the tortoise that bit you is your pet tortoise, you should leave it alone for a while and return later if you have any business with it.

A couple of hours should be sufficient time for the tortoise to regain its composure.

It’s important to know what to do and what not to do if bitten, but what’s even better is to know how to avoid being bitten, which we’ll discuss as well.

How to Avoid Getting Bitten

The best way to protect your fingers is to keep them out of harm’s way; therefore, avoid feeding your tortoise with your hand; instead, place the food on the ground. Tortoises don’t care how their food is obtained as long as it is obtained.

If you want to protect your toes, you should conceal them, so avoid wearing slippers or any other type of footwear that exposes them.

If you own a tortoise and wish to avoid being bitten, you should ensure that it is properly fed. When a tortoise is hungry, it will consume anything that resembles food.

Avoid stressing tortoises; even if they are naturally peaceful, they will attack you if they are stressed and perceive danger.

If a wild tortoise appears agitated, keep your distance; it can always bite you if you approach too closely.

And always handle them carefully. If you handle a tortoise properly, there is no chance of being bitten, so avoid placing your hand near its mouth.

Do Tortoises have Teeth?

No, tortoises don’t have teeth. When they eat, they bite into small pieces and swallow them right away.

The answer is no. In general, tortoises are very calm. They only attack if they are angry or hurt.

No, tortoises are not dangerous animals. It doesn’t matter that sometimes, they bite. People think they’re nice. For the most part, they won’t be mean to each other for no reason.

Can Tortoises Live with Other Pets?

Yes, tortoises can live with other pets without being hurt. If you read this article, “Can Tortoises Live With Other Pets?”, you’ll see that there are a few things to keep in mind. As a general rule, you want to be careful when you have young or playful pets, big or aggressive pets, or animals that might be sick and spread.

Do They only Bite when they are Hungry/Curious?

The answer is no. They can bite if they are afraid. People say that some animals are more afraid of each other than other animals are. They may bite more during certain times of the year, depending on which species they are.

While tortoises are generally peaceful pets, they do bite on occasion. You are likely to witness a snapping mouth at some point, whether they are threatened, hungry, or it is mating season.

As a tortoise owner, keep the scenarios discussed today in mind so that you are not in the way when they occur!