When a turtle flips over on its back, it is very likely that the turtle will die as a result.

Not all turtles will be able to flip back over in time to avoid harm. Some will even die from drowning as a result of being submerged in water when they flipped on their backs.

ALSO SEE: Can You Eat a Turtle Raw? 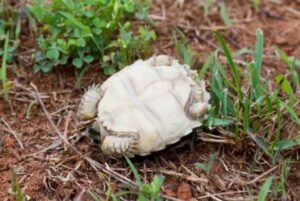 Can Turtles Flip Themselves Over?

Turtles are beloved by a large number of people, and some even keep them as pets. Turtles are undeniably appealing, and they can make excellent companions.

These animals have existed for an extremely long period of time, but they do have some weaknesses that can make life difficult for them. For example, when turtles are flipped over on their backs, they have a difficult time getting back up.

Turtles’ physical characteristics make it physically difficult for them to avoid being flipped over. However, can turtles flip themselves over at all?

Continue reading to learn more about turtles and whether they can turn on their backs when they fall. Certain turtles are unique, and you can learn all about them below.

Certain Turtles Can Easily Flip Over

The true answer to this question is that it depends on the type of turtle being discussed. There are turtles that can easily flip over and re-establish their feet.

Indeed, some turtles have shells that make it easier for them to flip back over when they find themselves on their backs. Turtles with dome-shaped shells will naturally begin rolling back toward an upright position.

Turtles with sufficient muscle mass can also flip over on their own. For instance, some turtles have extremely strong necks, which makes it easier for them to twist and turn and re-establish their footing.

Thus, you must understand that different turtle species will have varying degrees of success flipping over. Some of them will struggle to regain their upright position, while others will have little difficulty.

Turtles with Flat Shells Typically Have the Most Difficulty Flipping
Generally, flat-shelled turtles will have the most difficulty flipping over and regaining their feet. When a turtle’s shell is flat, it is unable to rock back and forth in order to re-establish proper footing.

Certain turtles with flat shells have muscles that enable them to resurface, but not all of them do. When turtles flip on their backs in this manner, they become trapped in a dangerous position.

Many people wonder why turtles have flat shells, as this vulnerability makes life difficult for turtles. If an accident occurs and a turtle is flipped over, it could be in serious trouble.

You might believe that evolution would assist turtles in improving their ability to flip over. This has occurred with a number of turtle species, but there are still a large number of turtles on the planet that face difficulties.

See also  How Long Can a Turtle Go Without Eating Food? [Useful Tips]

A Turtle on its Back Could Be Dangerous

Regrettably, placing turtles on their backs may eventually kill them. Eventually, a turtle may starve to death or perish from excessive heat exposure.

Indeed, some turtles may die more quickly than expected after being placed on their backs. Young turtles may be particularly susceptible to heat, which is something to keep in mind when caring for turtles.

Additionally, turtles have died as a result of being flipped on their shells underwater. Turtles are unable to breathe underwater, which means that if they become trapped, they will drown.

This is all quite tragic, and you’re probably hoping to be able to protect turtles who have been placed in this precarious situation. However, it is a common occurrence for many turtles in the wild, and it can occur for a variety of reasons.

Sex Copulation is not always easy for turtles, and it can even be dangerous. Male turtles are required to mount female turtles in order to mate, but this action is inherently dangerous.

As you can see, the male turtle may fall backward and end up on its back. If this occurs, the male may become stuck for an extended period of time, and may even die if it is unable to flip back over.

Depending on the turtle species, this could be extremely tragic for the turtle. Mating is more dangerous for turtles than it is for many other species.

Numerous actions that turtles take increase their chances of falling over. Even navigating certain types of terrain may be dangerous for turtles that are unable to easily flip over.

Predators Numerous tortoise species will be endangered as a result of being on their backs. Tortoises’ soft underbellies will be exposed to predators, which may result in tortoises being killed.

While the tortoise is in this state, a predator could easily come by and take advantage. Numerous predators will view this as an opportunity for a meal, and the tortoise will have little control over the situation.

This is why tortoises appear fearful when placed on their backs. This is an extremely vulnerable position, and the tortoise is probably aware that it could easily perish.

Even if a tortoise is capable of self-flipping, it may take some time and effort. Due to its position on its back, the tortoise will be vulnerable for at least some time.

Turtles Fight Amongst Themselves

Did you know that male turtles fight over females? This should come as no surprise, as many species have males fight for females in this manner.

What’s interesting about turtles fighting over potential mates is that some turtles attempt to flip over the other male turtles. If the male turtle is flipped over, the turtle that remains upright wins.

See also  Why is My Turtle Eyes White? FIND OUT!

It is possible that the male turtle that was flipped over will perish as a result of this exchange. However, as you are probably aware, many turtles are capable of regaining their feet after a period of time.

While it may seem cruel that turtles would do this to their own kind, it is comparable to any other type of animal competing during mating season. Turtles cannot kill one another directly, but they can collide in an attempt to establish dominance in order to attract mates.

Regrettably, there are people out there who commit atrocities against turtles they come across. Certain individuals may observe turtles and decide that it would be amusing to turn them on their backs.

There are cruel people out there who would engage in such behavior and find it amusing. However, this is not amusing to the turtle, and the turtle may die if left in this state.

While many turtle species are capable of flipping back over, this does not mean that every turtle is. There are turtles out there who have died as a result of cruel humans placing them on their backs.

This is unquestionably an act of animal cruelty, and turtles should be safeguarded against such individuals. Fortunately, the majority of people understand that treating turtles in this manner is wrong.

Assisting Turtles There are a few ways that you can assist turtles if you care about them and want them to thrive. If you ever see a turtle stuck on its back, you can gently approach it to offer assistance.

Gently turn the turtle over so that it can regain its bearings. Many people will do this if they see turtles struggling, and it has a strong possibility of saving the turtle’s life.

If you ever come across a turtle on the side of the road and notice it is stuck on its back, it is noble to stop and assist. You’ll want to approach the animal cautiously, as some turtles are capable of biting, and you can understand why a turtle might be wary of humans.

There are a few additional ways that you can assist turtles that are struggling. Each year, for example, numerous turtles are killed while attempting to cross the road.

When they see turtles attempting to cross a road, many people will stop and assist them. As long as you are cautious and gentle with the turtle, removing it from the road should be a good thing.

You want to gently pick up the turtle by grasping the sides of its shell. Once you have a firm grip on the turtle, you can carry it across the road in the direction in which it attempted to travel.

Turtles kept as pets can also fall on their backs and cause problems. While many types of pet turtles are capable of moving around and regaining their feet when lying on their backs, you should still exercise caution.

Turtles may drown if they fall onto their backs in a water-filled tank. Certain turtles may be more adept at regaining their feet than others, which means they may run out of energy attempting to flip over.

If a turtle runs out of energy and is unable to keep its neck raised, it risks drowning in the tank’s water. Fortunately, situations like this are uncommon, and you must pay much closer attention to baby turtles than you do to adult turtles.

Additionally, you could choose to keep only turtle-safe items in the turtle’s tank. Certain types of rocks and other structures placed in turtle habitats may actually aid turtles in winding up on their backs.

For instance, a turtle may attempt to climb a rock placed in the tank with it. If the turtle falls off the rock, it may land on its back.

While many turtle owners have no issues with such things, you may wish to err on the side of caution. Additionally, it’s a good idea to check on your turtles on a regular basis to see how they’re doing.

If you have a turtle that has difficulty flipping over, you may notice this early on. It allows you to keep an eye out for it and reduces the likelihood of the turtle being flipped on its back.

Understanding turtles and their ability to flip over should help you appreciate how difficult life can be for these animals. Turtles are intelligent creatures, and many are capable of flipping over to reclaim their feet.

However, some turtle species will struggle more than others. When a turtle flips over on its back, it is very likely that the turtle will die as a result.

Not all turtles will be able to flip back over in time to avoid harm. Some will even die from drowning as a result of being submerged in water when they flipped on their backs.

When turtles are in a vulnerable position, they must worry about predators, the elements, and a variety of other things. If you ever see a turtle struggling on the side of the road, it’s natural to want to assist them and rehabilitate them.

Appreciate how distinct the numerous species of turtles are. Some have developed excellent methods for regaining their feet, and you’ll even find turtles that can reclaim their upright position by utilizing their necks in novel ways.

Hopefully, you now feel as though you have learned everything there is to know about turtles and their ability to flip over. Keep an eye out for your pet turtles to avoid any major issues in the future.