So some have flippers, while others have legs!

The only turtles on the planet with flippers are sea turtles, which are large and only come ashore to lay eggs. These fascinating animals come in seven varieties.

All other turtles and land tortoises have feet on their legs. Aquatic and semi-aquatic turtles have webbed feet and live in freshwater rather than the oceans.

The turtle family includes more than a dozen genera and a plethora of species within those genera.

Turtles have at least some degree of webbing between their toes for life in the water–even full-fledged flippers in the most aquatic individuals.

ALSO SEE: Do Turtles Live in Water or Land?

Do Turtles have Bones in their Legs

Tortoises moves slowly and has a very short tail and four short legs. One of the two leg bones is the fibula. The limbs of a tortoise are attached to a set of bones called the pelvic girdle.

Do Sea Turtles have Back Legs?

Limbs are flippers that have been adapted for swimming. A sea turtle, unlike a land turtle, cannot retract its limbs beneath its shell. The forelimbs are paddle-like and long. The flipper has long digits that are fused together.

Do Sea Turtles have 4 Legs?

Do Turtles Have Fins?

Fins are not found on turtles. There are over 360 different species of turtles, each with its own set of feet that serve a specific purpose. Webbed feet are found in semi aquatics, flippers are found in sea turtles, and elephantine legs are found in terrestrial tortoises.

See also  Do Turtles Pee and Poop? Where? - SEE HERE!

While swimming underwater, aquatic turtles paddle with their flippers and webbed feet. Sea turtles, like penguins and cetaceans, have flippers that help them swim even faster!

The sea turtle’s flippers bear the most resemblance to fins. Allow me to explain how a flipper differs from a fin.

Difference Between Flipper And Fin

Fins are made entirely of cartilage and lack any bones or skeletal structure. Flippers, on the other hand, have bone structure beneath the outer layer. Cartilage, joints, and tendons make up these structures.

You can see how similar a turtle’s hand and shoulder are to a human hand and shoulder if you X-ray it. In contrast to cetaceans like whales and dolphins, which have flippers, almost all fish have fins. Flippers are also found on penguins, seals, and walruses.

Do All Turtles Have Flippers Then?

Terrestrial turtles, such as box turtles, have toes on their limbs. Elephantine legs refers to the thickness of their hind legs. Flippers are only found on sea turtles. 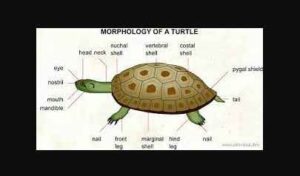 Why Do Turtles Have Webbed Feet?

Webbed feet are found on the majority of aquatic turtles. Over a million years, these feet have evolved. They lack the separation of our fingers. Their intertwined fingers create a larger surface area, allowing the turtle to effectively propel itself through the water.

Turtles spend time on land and in the water, and their webbed feet assist them in walking on land.

Common snapping turtles and red-eared sliders are examples of freshwater turtles that forage on both land and water. Loggerhead snapping turtles can even climb and eat insects that they find in the trees.

Their webbed feet allow them to catch their prey quickly in the water. As a result, turtles with webbed feet can expand their foraging area, which is essential for their survival.

See also  Can a Turtle Shell Stop a Bullet? Tested with Results!

When it comes to aquatic turtles, let’s focus on the heavyweights of the group, namely sea turtles.

Why Do Sea Turtles Have Flippers?

Instead of webbed feet, sea turtles have flippers. Sea turtles, unlike other aquatic turtles, eat only from the sea. Their powerful flippers allow them to travel thousands of miles in search of sea vegetation and jellyfish.

Because they rarely visit land, these sea turtles do not require webbed feet. Only when they need to lay their eggs will they come to land.

Instead of webbed feet, sea turtles have flippers. Sea turtles, unlike other aquatic turtles, eat only from the sea. Their powerful flippers allow them to travel thousands of miles in search of sea vegetation and jellyfish.

Because they rarely visit land, these sea turtles do not require webbed feet. Only when they need to lay their eggs will they come to land.

Despite spending the majority of their time at sea, female sea turtles must return to the beach to lay their eggs. She’ll dig a hole that’s 16 to 20 inches deep with her flippers. Her flippers will once again fill the hole with the dug-up sand.

A turtle will chew on her prey while holding it in her flipper. Photographs of a sea turtle devouring a jellyfish had gone viral a long time ago. Turtles commonly do this to prey that tries to flee their clutches.

They also toss their prey into the air to temporarily paralyze them with their flippers. This will cause the target to become disoriented, allowing the turtles to enjoy their meal.

Because jellyfish have trailing tendrils that prevent them from being eaten whole, eating them can be messy. As a result, when the turtle is preying on a jellyfish, it will slash the tendrils with its flippers and cut them into smaller chunks, making it easier to consume.

Anatomy Of A Turtle’s Flipper

Turtles have skeletons that are similar to our hands beneath their flippers. Even an x-ray of a turtle’s flipper can be mistaken for our hands. It’s like wearing oven mitts with the flipper covering the skeleton.

Despite being wrapped by the flipper, their finger movements are unrestricted. They can still engage in a variety of activities that are necessary for their survival.

So, How Come These Turtles Became Good With Their Flippers?

Turtles learn to use their flippers in new ways, such as holding a jellyfish and slashing it into smaller chunks, despite having a developed frontal cortex. Though using a flipper in this manner is not always highly effective, it is a novel way of using their flippers.

Scientists were astounded when they discovered turtles hunting with their flippers. Turtles are one of the few animals that aren’t taught or guided by their mothers or fathers. They never have the opportunity to learn from their elders, so they have to teach themselves everything.

Some people believe that living a longer life allows them to experiment with many things on their own and learn how they work. Isn’t it enthralling?

Let’s talk about tortoises and their elephant-like legs now that we’ve covered webbed feet and flippers.

Turtles that live on land are known as tortoises. Unlike aquatic and semi-aquatic turtles, they do not rely on water for survival. Tortoises are members of the turtle family, but their behavior is distinct due to their physical differences.