They do not urinate. They poop uric acid. The “pee” you see in toads and turtles is just their cloacal water reserves being scared out and released onto you. No urine, as turtles don’t make it.

The key is to approach slowly, pick it up gently, and keep it close to the ground so it doesn’t get scared and urinate.” The focus works. Defend the tortoise! Guarding endangered species

Stress can cause urination, feces, or both.

Some animals do this on purpose to defend themselves.

Get them used to gentle handling gradually. Even if they are used to being picked up, handle them for only a few seconds at first.

My turtles never peed or pooped on me, but I always picked them up for a few seconds at first to make sure they were safe and secure. I’d hold hatchlings in my hand, not dangle them. In addition, I’d handle them in water to get them used to being touched.

This is terrifying for them, so give them something to push on, like your hand or arm or some solid surface that you can hold. 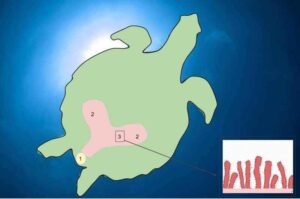 ALSO SEE: Can Turtles And Frogs Live Together in a Pond/Aquarium?

As shown in the image above, the cloaca is the turtle’s butt. Turtles use this to urinate, defecate, and lay eggs. And one of the places they breathe.

The cloaca, like the lungs, works by sucking in water, gathering oxygen, and then expelling it. The turtle’s internal structure makes this process less tiring than normal breathing.

Even if using the cloaca is less exhausting for the turtle, it cannot normally survive for long periods of time.

Some turtles, like the Olive ridley sea turtle, can stay underwater for almost ten hours, and the cloaca provides them with oxygen. Not all turtles that use their cloaca for breathing can spend this long underwater, but they can spend much more time than they could without it.

See also  Can a Pet Turtle Survive in the Wild? [Do this Instead]

Depending on their natural habitat, different turtle species can get more air through their cloaca than others. Sea turtles use it constantly as some spend their entire lives in the water. Aquatic turtles, on the other hand, spend some time on land. And land turtles that don’t go underwater don’t need the cloaca’s breathing abilities.

How Turtles Use Pee to Defend

Turtles can also use their pee to defend themselves. When scared, turtles can pee on themselves. While this may not appear to be a very effective defense, it is. Many predators can smell their prey and decide if it’s a good meal or not.

You may have seen horror movies where people being attacked by monsters or ghosts pee themselves. Contrary to popular belief, humans have the same defense mechanism as turtles.

This mechanism is easily seen by new turtle owners. Pick up your turtle and you will see it start to pee. This is because your turtle believes you are a predator trying to eat it.

While your turtle will eventually stop peeing on your hand, this is one of the few times you can see it.

Here is a video of a turtle peeing while being held:

When Do Turtles Pee?

Except in the above situation, it is nearly impossible to see a turtle pee for two reasons.

The first is that turtles are small, so they will have a small bladder. So the amount of pee is small, making it difficult to see.

The second reason is that they live in water, where pee is difficult to see, especially given the small amount they produce.

Thank you for reading about turtle pee. Questions? Please leave them in the comments section and I will respond as soon as possible.