Turtles cannot sneeze since they lack a diaphragm. However, if they do, it’s usually not a good sign. A sneeze from a turtle can relate to a respiratory infection, RI, or a deficiency in Vitamin A.

Yes, turtles are unable to physically sneeze. They do not have a diaphragm. Instead, they forcefully pull their head back into their shell, compressing their lungs and forcing a blast of air. It doesn’t automatically mean it has an upper respiratory infection but it is a sign.

ALSO SEE: Why is My Turtle Throwing Up?

Why Do My Turtles Sneeze?

As earlier stated, sneezing can be a sign of vitamin A deficiency or respiratory infection.

If your map turtle is stretching its neck out to breathe, mouth-breathing, or gaping its mouth, those are all signs of a respiratory infection.

Some turtles suffering from RI may pump their heads and legs obviously or show other signs of labored breathing.

Another major sign of respiratory infection in map turtles is if they float unevenly in the water. A map turtle listing to one side has a serious infection in the air sacs and/or lungs.

It doesn’t matter if the turtle in question is acting fine. Please seek out a qualified herp veterinarian and take your map turtle in for evaluation and treatment.

If your map turtle has a respiratory infection, it isn’t likely to resolve without intervention by a veterinary professional. So, please find a herp veterinarian who can help you with your map turtle.

Red eared slider turtles can sneeze inside and outside of water. Reasons, why RES turtles sneeze, include Long term exposure to cold water, lack of Vitamin A and respiratory tract infection.

Two of my turtles began sneezing last week in and outside water, and I took them to see the doctor. She said the cause is the exposure to cold water which they were staying in and consuming the cold water.

So we started filling the tank with lukewarm water and that’s how they got well. 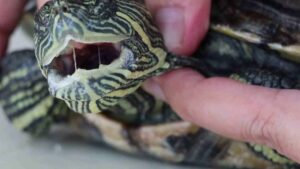 Sneezing in box turtles is usually associated with infection or water in the sinus cavities.

If it is water, it should abate after some minutes, if it does not clear up very soon or is persistent, a veterinary visit is required as antibiotics need to be prescribed.

Vitamin A deficiencies are commonly related to respiratory diseases in turtles/tortoises.

Check temperature, both water, and environment, to assure optimal.

Every once-in-a-while, sea turtles may sneeze as the water gets into their sinus cavities….Occasionally though, a sneeze can be a sign of an Upper Respiratory Tract Disease (URTD) and will require immediate veterinary treatment to cure the infection.

Can A Tortoise Sneeze?

Tortoises can sneeze just once, and they can sneeze many times in a row, just like people can. … But a sneeze can be a sign of an Upper Respiratory Tract Disease (URTD) and will require immediate veterinary treatment to cure the infection.