If a turtle’s shell is empty, it means the turtle has died and its body has decomposed. The shell of a turtle is a part of its skeleton.

So, what does an empty turtle shell imply occurred? For starters, turtles, like all animals more advanced than an archaic amoeba, die. They are often eaten by scavengers or by the animal that killed them after they have died, leaving an empty shell.

Many predators will at least try to kill a turtle or tortoise, including bears, wolves, wolverines, feral dogs, and even cats if the turtle is small and young. Turtles are eaten by alligators (and alligator snapping turtles), alligator gars, and even seabirds, depending on their age and size.

See also  Can Tortoises eat Grass/Grasshoppers from Your Yard? [ANSWERED]

Some of these predators will leave a shell that is both empty and undamaged. However, in most cases, the shell is crushed at least partially and is not visible to humans. 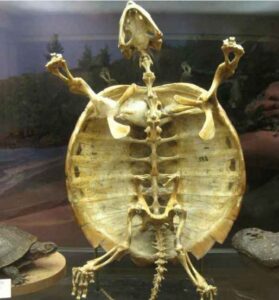 Is an Empty Turtle Shell one that the Turtle had discarded because it was too small?

For the protrusion of the head, four limbs, and tail, as well as the elimination of waste, six ports (holes) are provided. The skeleton of the animal is fused to one of the shells, and the skin of the neck, legs, and tail is fused to the holes’ edges.

The plates of the shells enlarge in all lateral directions (and minimally in thickness) as the animal grows larger, eliminating the need for lizards, snakes, and other reptiles to shuck their shells.

A turtle in your dream symbolizes the health and harmony of your environment and lifestyle. A turtle’s shell in a dream could represent protection, seclusion, or being “shelled” off from others.