The shell of a turtle is made up of many layers of different materials. In my case, I have a turtle. It seems like the turtle peels off a piece of its shell at a time. When a turtle sheds its shell, it doesn’t do it all at once. Instead, the turtle sheds a little at a time, which lets the shell grow. Do the same with its legs.

The shell of a turtle is made up of many layers of different materials.

Turtles have rib cages and breast bones that grow together. This is what makes up their “bone core.” This part grows like any other bone does. It mostly grows on the sides that are flat, like a human skull does. Even if you look at the skull and the shell of the turtle, you’ll see the same little zig-zag “suture lines” that connect the different bones.

A lot of the growth happens on these lines. 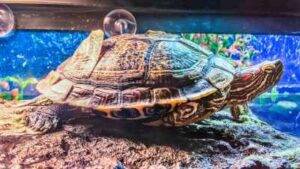 A layer of living skin is on top of that. It has the same kind of skin on its head and feet. A lot of reptiles have skin like this. Layers are inside and outside of it, with the outer layers being a little more “dead” than the inside layers. In the very outer layer, everything is dead. Scales are made out of this layer.

It looks more like alligators than snakes when turtle scales are like bony bumps in their skin.

This makes a ring of growth around the edges. Turtles have rings on their shells, and on some of them, this makes the shell look like a tree. On other turtles, it is so smooth that it is almost unnoticeable.

The shedding is usually done to get rid of the algae, oil, and dirt that is on the surface. This makes it hard for the heat to get through (turtles are cold blooded).

ALSO SEE: How Many Turtles Die from Straws?

Can a Turtle Outgrow Its Shell?

If one shell is damaged or doesn’t fit anymore, a turtle can’t switch out for another one. A hermit crab, on the other hand, can trade one shell for another. They never fall off and are never too big or small because the shell grows with the turtle.

See also  Can Turtles Eat Tomatoes? How to Feed, SAFELY!

It’s made from the turtle’s rib cage and spine, and it’s attached to the turtle’s bones inside its body. As your spine grows, so does the shell of a turtle.

Most turtles have scutes on their shells that fall off or peel off as they get bigger. This makes room for bigger scutes. Shedding is a normal part of life, and scutes fall off as the animal does things like swim and lay on the ground.

Because turtles are cold-blooded reptiles, they have to get their heat and cool from outside sources. As you can see, basking is just lying in the water. It’s also a turtle favorite.

While turtles bask to raise their body temperature, it also helps them shed scutes by drying them out and making them ready to fall off. Some turtles, like the South American river turtle, help each other out during the shedding process by pulling loose scutes (and algae) off each other’s shells with their jaws [source:].

Because the shell can feel both pain and pressure, this is done very carefully, because both can be felt.

When old scutes aren’t properly thrown away or are thrown away too often, turtle shells can become infected and sick. People who have dyssecdysis, which is a fancy word for people who shed their scutes in the wrong way, can get sick.

See also  Do Barnacles Hurt Turtles Shells? & How to Remove!

Scutes can fall off too often, leaving the shell’s bones exposed and soft.

This can lead to bigger problems, like kidney failure, if the scutes fall off too often.

Shell health is also linked to bone health. Metabolic bone disease, which can be caused by not getting enough calcium, not getting enough sunlight, and having diseases of the liver, kidneys, and thyroid, can cause soft or misshapen shell bones.

Ulcers, which are also called shell rot, can make the shell and scutes look bad for a long time.

Shell disease doesn’t happen as often as injuries, though. There are a lot of turtles that have shells that are broken. This happens when turtles are hit by or attacked by wildlife. A turtle shell is made of living materials, so it can slowly repair itself and grow back.

Some veterinarians can use bonding material to fix broken shells, but one of the best things about a turtle shell is that it can grow back.