DO NOT RELEASE A PET TURTLE unless you first caught it in the wild.

Under no circumstances will your turtle ever, ever make it out alive.

Your turtle has lived its whole life in a box. It lives in an air-conditioned, luxurious hotel with its own “sun.” Its every need is met by men, and its environment is free of natural predators and threats, so it is safe and happy.

It rains pellets from the sky every day, or once to a few times a week, or something else, depending on how big it is. The turtle thanks its master and eats a meal that only it can enjoy. It expects to be fed in that amount of time. Even though it can go without food for a month, it has never been hungry.

Like a welfare queen who doesn’t work, your turtle needs your help to live. Your turtle can’t go out and look for food on its own. It doesn’t know what’s outside of its tank.

If your turtle doesn’t get a meal in a while, it will die of starvation. Either way, it will be eaten by a predator very quickly.

To get rid of your pet turtle, put up posters, ask people for help or write a Craigslist ad asking for someone to take your turtle.

It’s time to give up your boat to someone else. Do not let it go into the wild.

DO NOT RELEASE YOUR TURTLE INTO THE WILD.

DO NOT RELEASE YOUR TURTLE INTO THE WILD.

Where Can I Donate My Turtle Near Me?

ALSO SEE: Can Turtles Live in a 10 Gallon Tank?

Where is the best Place to Release my Pet Turtle if I want to Get Rid of It?

You technically have the option of releasing it anywhere. A trash can, which you can throw out the window while driving, a garbage disposal, or a parking lot, or wherever is most convenient. Releasing it into the wild is not an acceptable method of emancipating yourself from a pet for which you accepted responsibility and now no longer desire.

Because it is essentially a death sentence, it makes no difference where it is executed.

It was almost certainly bred and raised in captivity. On a regular basis, well-balanced food pellets. A pleasant, warm heat lamp and a decorative rock for sunbathing. However, there are no winters in which to hibernate since it’s enclosure maintains a constant temperature thanks to your help. Perhaps a filter and a nice, predator-free tank.

Now, acclimate it to a world devoid of all of that. If all it has ever known is a safe, warm tank filled with food pellets, dumping it into a world it has never encountered sounds pretty awful, doesn’t it? If you truly cared about your turtle, you would never do such a thing to him, correct?

Create a Craigslist ad or a flyer for a pet store. Sell it or give it to someone who will appreciate it. 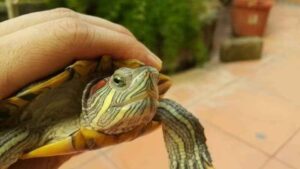 Where can I take my Turtle to Give Away?

Give your Red-eared Slider to a friend or family member who is ready and willing to adopt a pet turtle. If that isn’t possible, you can contact your local zoo or one of the state’s reptile rescue centers.

Let’s take a closer look at each option.

Okay, so this isn’t the answer you wanted. And I know you’ve considered it before, but bear with me.

The first step is to give your turtle to a capable friend or family member who will accept him with open arms. Second, it will relieve reptile rescue centers already overloaded.

Red-eared sliders have a slim chance of finding a new home once rescued or adopted. So, if you know someone who is willing and experienced enough to raise these turtles, go for it.

A Red-eared slider can be a great addition to any home, but it must be properly assessed. Do you think he can afford and care for a turtle? Is his home environment suitable?

In the first few weeks or months after giving away the pet, keep in touch with him. You can also request photos or videos. But you must make these requests clear before handing the turtle so they are not annoyed later.

If you have a turtle, consider giving it to a local zoo or aquarium. If successful, your Red-eared Slider will be able to live with other turtles and will not have to adapt to drastic environmental changes.

Many zoos and local animal parks are willing to take in a turtle if they can care for it. You can always call in and explain. I believe there is a legal aspect to giving away your turtle. Then you will need to fill out some paperwork before giving your pet away.

Lucky for you, there are several reptile rescue and adoption centers in the US that can give your Red-eared Slider a safe and secure life.

Some of these centers house all kinds of animals, while others only reptiles and turtles. To donate your pet, you will need to fill out paperwork and be screened to ensure you are the rightful owner or donor.

This page has a comprehensive list of turtle rescue centers in every US state.

For a small fee, many fish and pet stores will adopt your Red-eared Slider. The abandonment rate for these turtles is high, but so is the trading rate. The pet trade produces millions of Sliders every year.

So your local pet store may accept your pet. Adults are less likely than children and babies to be accepted.

But you must reassess the buyer’s intent and capacity.

We can’t rule out your turtle being used for breeding and then released back into the wild. Confirm that the store is trustworthy, has good intentions, and can provide future updates on the turtle’s health.

Do not release any pet into the wild. Period. Full stop.

Your reptile can be…

…given to a local animal shelter

…sold or rehomed on craigslist or other message boards

Releasing the turtle means almost certain death for the turtle, and it it doesn’t die, then a high likelihood that it will introduce parasites or diseases to wild turtles, if it survives long-term then it could be the start of an invasive species leading to habitat destruction and perhaps even the extinction of wild turtle species.