By the date of hatching, A veterinarian may be able to make an educated guess as to the animal’s age based on its shell condition, overall size, and other factors, but there is no way to pinpoint it. (No, you cannot determine the age of a tortoise by counting the growth rings on its scutes; these only indicate periods of faster growth.)

A bad season, or two good periods in a single year separated by a bad period, would invalidate the count). Furthermore, those rings tend to fall off on truly elderly tortoises.

There is no way to be certain of their age unless you know their birthday. However, educated guesses can be made based on a variety of factors.

Size in comparison to the species’ average and sex.

Dietary preferences, which fluctuate with age.

When a tortoise lives in a climate with distinct seasons and growth periods, the growth rings can be quite precise. Seasons that are more defined are more accurate. It cannot be considered completely accurate because seasons can have two distinct growth periods.

Additionally, as mentioned previously, as a tortoise ages, its rings wear down, and the new rings on an older tortoise can become quite narrow and difficult to define as growth slows with age.

It becomes more difficult in captivity, as there may be no defined growing seasons, depending on how the tortoise was kept. Additionally, illness and stress can alter this pattern. With experience, I believe that you can frequently spot this in the rings and account for it numerous times.

I know this because I can count the rings on all of my sulcatas and they exactly match the known ages because I raised them from hatching to 27 years. 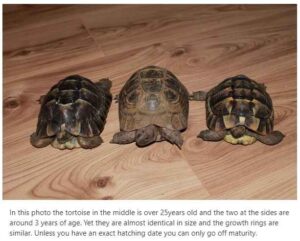 How to Tell How old a Tortoise is

My observations and experiences have convinced me that the majority of tortoises, even those kept in captivity, do have an annual growth cycle. If we are successful in reproducing identical conditions throughout the year, this becomes increasingly insignificant.

However, regardless of what we do, the length of the day changes, affecting ambient light – brightness and color, which includes UV light that they see. Even with thermostats, cooler average temperatures have an effect on the average temperature in our enclosures.

The best foods that we can offer change throughout the year. Perhaps there is a dip in barometric pressure. Metabolic energy is more heavily invested in breeding. et cetera, et cetera.

Almost all tortoises appear to have a period during which their growth is significantly slowed.

Thus, because there is no corresponding spreading of bone plates, the slowing keratin growth stacks a bit at the seam. When another growth spurt occurs, the bone begins to separate the scute seams again and the keratin fills in at a “normal level.” A ridge is left in its wake.

Observing these forms, I notice that minor rings are continuously produced throughout the year due to the variations in growth rate that a tortoise can experience. Because I weigh and graph growth on a monthly basis, I can see when a tortoise enters a stubborn growth phase and develops a minor ring.

When a growth spurt occurs, I can see the remnants of that minor ridge. I believe that bone growth occurs in spurts and that keratin growth responds similarly but more slowly.

Thus, determining which rings are annual and which are minor is an educated guess! According to my observations, when the overall pattern of several adjacent rings is viewed, the deeper, more prominent rings stand out slightly.

The tortoise’s species appears to have an effect on how visible this is. That is why I thought it would be fascinating to examine a well-cared-for captive leopard. Sulcatas have the most prominent rings, as shown in my photograph.

This also means they are prone to developing minor rings. Leopards do not appear to develop a ring as deep.

Occasionally, it’s extremely difficult to see. Shell wear in wild leopards also appears to rapidly obliterate rings. As a result, I thought it would be fun to guess @Elohi’s female, as it was captive raised, by an excellent keeper, and mature enough to lay. As you can see, the tortoise’s growth rings are much less visible.

Additionally, the uniformity of the growth appears to be. However, I can still make out what appears to be nine distinct ridges.

It is not precise. However, I am convinced that we can learn a great deal about a tortoise by examining how its shell has grown. I believe it is enjoyable and useful for estimating age in many instances.