Small quick fish (like danios) may be able to avoid capture for a short time if they have enough hiding places. Captive turts, when fed on a schedule, will just get lazy. Why should they chase after a little fish when they know the Big head will be along soon with some veggies or pellets?

It’s okay if your turtle won’t eat the feeder fish if they’re minnows because the minnows (living ones) will “clean up” after the turtle and keep the bottom of your tank looking prettier. That is, as long as there aren’t too many minnows or they aren’t too big. If there are too many minnows, they will contribute to the waste load rather than aid.

Oh, and remember that you should only feed feeder fish once every two weeks, or once every month. One fish for one turtle is fine. 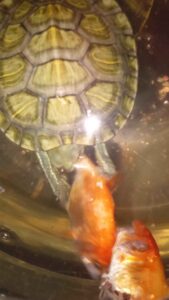 I suppose the fish that is best suitable with the surroundings.

See also  WHY do Red Eared Slider Bite Humans or Each Other?

Someone may mention a large fish, which may frighten the turtle. But if the large guy can’t move around efficiently, being eaten piece by piece is merely a matter of time.

If your tank does not provide enough protection for the fish, those who can swim quickly will not be able to avoid the turtle all of the time.