It’s not a good idea to keep turtles in pairs. Most people, including myself, prefer to buy two turtles so that they have company. However, their way of thinking is different; they prefer to be alone. Turtles can easily stress each other out, and some of them are even cannibals.

Separating the turtles is the best option.

This is why I never recommend putting two sliders or cooters in the same tank. When they’re young, they get along fine, but once they reach sexual maturity, they can be quite aggressive. Turtles have the ability to kill each other and will do so.

To prevent either of the turtles from becoming injured, you must separate them right away. The aggression depicted in the video is no laughing matter, and it has the potential to escalate quickly.

Unfortunately, your only option is to separate them. Turtles prefer to be alone. Biting is already the most severe form of aggression, and I guarantee it wasn’t the first sign you noticed. 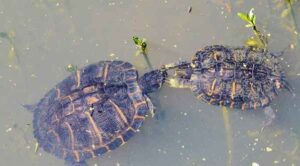 Bullying in turtle tanks is usually quiet, and most owners are unaware of the problem until it escalates into outright aggression or one of the turtles becomes ill. The majority of signs of bullying/dominance are misinterpreted as “love” when they are not.

The signs of following each other and stacking on top of each other are frequently misinterpreted as “love.”

In addition, the act of mating is aggressive, and mating can be fatal. Especially if the females aren’t returning the favor.

Finally, I’d like to point out that breeding sliders is unethical because they are currently the most abandoned pet in the United States. Sliders are being euthanized because they are invasive, and a large number of sliders are in desperate need of homes.

It is extremely unethical to breed more sliders.

Your best and most responsible option is to separate.

Turtles bite each other for a variety of reasons.

Turtles bite each other for three reasons (one of which is uncommon):

Territorial conflicts, such as in aquariums and swimming pools, where they feel crowded and thus threatened. Turtles in nature tend to avoid each other, except when they are basking in the sun on rocks and logs.

Male turtles frequently bite female turtles in a display of dominance, though not as hard as (1) above.

They’re famished. If there is a scarcity of food, turtles will eat other turtles if they have the chance. A large Snapping Turtle enjoys a young pond turtle as a snack.

What causes turtles to bite each other?

It is determined by the breed, age, and maturity of the animal. Most turtles, on the other hand, fight over territory or attempted mating that they don’t want to participate in.

I currently have an older female and a younger (possibly) male red-eared slider. Peanut, the younger of the two, has reached sexual maturity in the last three years and tries to mate with Olivia, the older female, on occasion. It does not sit well with her.

She bites him and then chases him around the room with a vengeance.

Some turtles make an odd-looking arm motion in front of their faces to indicate that they are either attempting to mate or fighting. So far, only my younger turtle has done so, and it appears to be due to sexual frustration.

Since he was the size of a quarter, I’ve had the little guy.

Notice how the turtle on the right side of the image has its arms raised, right in the face of the other turtle? That’s exactly what I’m referring to. They’ll wiggle their arms in front of the opposing turtle, which is kind of amusing to watch.

This can either mean “let’s fight” or “let’s f*ck,” depending on the context.

Olivia looked like she almost ripped his arm off at one point. It terrified me so much. Before I could trust them again, or until Peanut stopped trying to mate, I had to separate them for a long time.

Nothing changed because I put a small barrier between them in the same tank; they just couldn’t be in the same area and had separate basking areas right next to each other.

The barrier I built between them was similar to a milk crate in that it was made of plastic with grid-like holes that allowed water to pass freely for filtering and heating.

They could also see but not touch each other. So, if you need a barrier, I went to Menards and got that crate-like thing from the “lighting section,” which is apparently a cover for those long rectangular light fixtures you’d see in basements or a large warehouse.

But, compared to buying commercially made fish tank barriers, it works perfectly for this and is extremely inexpensive.

Through the barrier, they actually slept holding hands. Some of the sweetest nonsense I’ve ever seen.

So, after a year, I removed the barrier, and they no longer fight. I’d be lying if I said Peanut didn’t still try to mate now that they’ve been separated, but they get along so much better.

To summarize, if your turtles are making that arm motion to each other, they are either physically fighting or attempting to mate. If they start fighting, you must separate them right away because they will fight to the death.

They are still animals, and they engage in territorial behavior. So, while it may begin as one turtle trying to mate, it can quickly escalate into full-fledged aggression and fighting if not addressed properly.

Even if they are of the same breed, it is usually not a good idea to keep two adult turtles in the same tank.

If you do keep multiple turtles in the same tank, it must be a very large tank (honestly, even with just one turtle, the tank should be enormous), the turtles must be of the same breed or very similar, and you must keep an eye on them and understand what their behavior means.

Turtles are a lot of work to look after. They aren’t like cats or fish. They may perish if the air in their tank is too cold. They don’t show signs of illness until they’re on the verge of dying. They simply perish. They have specific requirements.

However, they are fascinating animals who can learn to trust and communicate with their handlers. I’m still able to feed both of my turtles with my hands. I’ll get some freeze-dried shrimp and give them a bite.

Peanut is gentler because he has been fed from my hand since he was a baby. He’s aware that he shouldn’t bite my fingers too hard. It tickles a little, though I haven’t done that in a while. He used to live in a drawer, so it’s the least I could do for him to hand feed him freeze-dried shrimp.

I hope you learned something new about turtles after reading this post. They’re lovely creatures who deserve nothing but the best from us. I’m not a turtle expert; I’ve just spent a lot of time caring for them.