They are unaware that glass separates them from a completely different world, our dry habitat; they behave similarly to fish in an aquarium; they can feel the glass but cannot see it because it is clear, so they will continue to swim against it in an attempt to reach the distant location seen in our environment.

Swimming against the glass for too long will exhaust them to the point that they won’t be able to surface for air, resulting in drowning. It’s important to buy something that will draw the turtle’s attention away from the outside world, and since they don’t need to be in the water all of the time, you can take them out of the water.

It’s best to get something that will divert the turtle’s attention away from the outside world. Since they don’t need to be in the water all of the time, you can take them out of the tank for a short period of time several times a day to allow them to explore the alien environment you live in. Just make sure it doesn’t get a hold of anything harmful.

Why is my Turtle Swimming at the Glass

Because most animals are unable to recognize themselves in the mirror, they attempt to swim towards the “other turtle” they perceive in the glass. They’re perplexed when they collide with the glass because clear objects are uncommon in nature.

If there is no reflection, the turtle is oblivious to the fact that the tank is separated from the rest of the room. They collide with the glass, become confused, and continue to collide with it. If your turtle does this frequently, to the point where it appears to be injuring itself, I propose placing a piece of poster board or another opaque material against the outside of the tank, if possible. You can use some tape to hold it in place (not too much).

If your turtle does this frequently, to the point where it appears to be injuring itself, I propose placing a piece of poster board or another opaque material against the outside of the tank, if possible. You may either attach it to the tank or prop it against it with some tape (not too adhesive, as it will leave residue on the tank if you decide to remove it later). 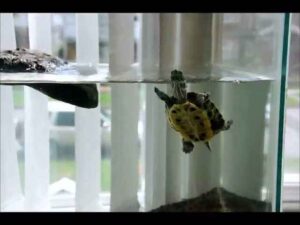 Why does My Turtle keep Swimming into the Glass?

Swimming against the glass is typical, but if she is furiously splashing water out of the tank and running up and down the basking dock attempting to get out, it could be an indication she wants to lay eggs (she may also stop eating which is another tell-tale sign). Turtles, like chickens, do not require a male to lay eggs, and the eggs will not be fertilized (will not hatch).

The best method to be sure is to take her to the vet, who can perform an X-ray and determine if she needs to lay eggs. Any turtle that needs to lay eggs should not keep them in its body and should lay them as soon as possible.

Why does my Turtle Swim towards Me?

Red eared sliders beg in the same way that dogs do. When it sees me, it does the same way (swims against the tank), but when other people enter the room, it does not. After a while, he’ll usually stop and return to swimming or sunbathing.