Male turtle fanning is normal. Teen and older boys do it too! Turtles fans when they are EXCITED, stressed or RELAXING.

The huge black-looking thing coming out from his vent is huge and is normal as long as it goes back in.

Why is My Turtle Is Fanning?

Fanning is the male genitals coming out through the opening in the tail, signifying that you have a male. Fanning is not fluttering. Fluttering is the little dance with their paws.

Turtles fans when they are EXCITED, stressed, or RELAXING.

It’s more like dogs doing something similar. It is fine as long as it’s not kept out for long. Also, watch out for pecking from other turtles as they do this. 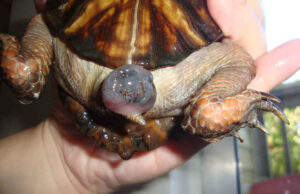 Do Female Turtles Flutter Their Claws?

Male turtles mostly flutter their claws, but females, sometimes do this too.

Why Is My Turtle Fluttering?

Turtles flutter as a courtship ritual or “mating dance”. It is mostly done by males, so you might be able to use this behavior to distinguish males from females.

Most male turtles woo females to mate by approaching them underwater and then the turtle will face the other and vibrate or flutter its front claws around the female turtle’s head.

As soon as the female turtle catches sight of this, and is amenable to the invitation, they drop to the aquatic floor. At that point in time, the pair are ready to mate and fertilize.

So, if a female is put off by all that fluttering. They become hostile to the male. The mating in turtles typically take 10-15 minutes, but turtles can spend another 45 minutes beforehand just fluttering and wooing